How Fast Can You Write on Your Smartphone?
Many Americans use smartphones for most or all of their day-to-day communication activities. One result is that people have gotten faster and better at typing emails and text messages on their phones.
But how fast are we at using an electronic device compared to typing words on a traditional, physical keyboard? A new study has some answers. A team of researchers carried out an experiment. It involved more than 37,000 volunteers from over 160 countries.
The study was a project of researchers from Finland's Aalto University, England's University of Cambridge and ETH Zurich, the Swiss Federal Institute of Technology. They used an Internet-based system to test the typing speed of people on their smartphones.
On average, the volunteers estimated they spent about six hours a day using their phones. The majority said they used two thumbs to write messages. Both Android and iPhone users were tested, and most said they used the device's standard keyboard.
The experiment
The volunteers were given 15 English sentences to type out on their phones "as quickly and accurately as possible." The research team found that on average, people wrote about 36 words per minute. Those tested made a typing mistake 2.3 percent of the time.
The researchers noted that 36 words per minute is about 25 percent slower than the average rate for people using a computer keyboard. In a 2018 University of Cambridge study, the average speed for computer typists was about 52 words per minute.
The researchers noted one reason for the narrowing of speed rates between smartphones and computers. They said people have become slower at typing on keyboards over the years.
Seventy-five percent of those taking part in the study had typing speeds below 44 words per minute. But the fastest phone typists reached speeds of over 80 words per minute.
The published results show there was no difference between males and females in the typing speeds.
Subjects who reported using two thumbs or two fingers reached speeds of 38 words per minute. Those who said they used only one finger typed 29 words per minute.
Among age groups, the fastest typists on an electronic device were between 10 and 19 years old. They typed nearly 40 words per minute. People aged 40 to 49 wrote about 29 words per minute. And the rate dropped to 26 words per minute for those aged 50 to 59. 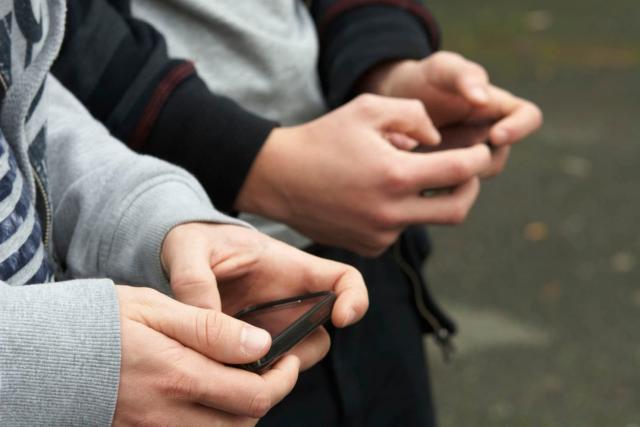 Reaction to the findings
Anna Feit, a researcher at ETH Zurich, helped lead the study. She said it makes sense that younger people have higher typing speeds because they generally spend a lot more time on their devices.
"Such a large amount of experience transfers to the development of typing skill," Feit said. "And explains why young people — who spend more time with social media, communicating with each other — are picking up higher speeds."
The researchers also found that a phone's automatic correct tool can be extremely helpful. Users were able to type faster than those without the correct tool. But word prediction tools were not very helpful to users in the experiment, noted Aalto University researcher Sunjun Kim.
"The given understanding is that techniques like word completion help people," Kim said. "But what we found out is that the time spent thinking about the word suggestions often outweighs the time it would take you to type the letters, making you slower overall."
The researchers call the difference between typing words on a smartphone and a physical keyboard "the typing gap." They predict this gap will further narrow in the future as people get less skilled with keyboards and as smart methods for typing on devices continue to improve.
I'm Bryan Lynn.