JUDY WOODRUFF: Last week, we brought you a different sports story, this one about some of the top adaptive athletes in the world who play for professional tennis while using wheelchairs. Tonight, we bring you the story of an amateur athlete, Minda Dentler, who has this Brief But Spectacular take on finding strength through sports.

MINDA DENTLER, Amateur Athlete: I take the subway to work. And, sometimes, when I go up the stairs in the subway, people will like pat me on the back and say, Oh, good job, like as if, like, I have achieved something by going to work. I was born in Bombay, India. When I was about 6 months old, I contracted polio. It's a disease that affects your nervous system. So my legs became paralyzed. And my birth mother, she realized that she couldn't take care of me, so she decided to leave me at an orphanage. I was adopted by an American family at age 3.5, and I moved to Spokane, Washington. I have a sister the exact same age as me. I was crawling on the ground, and my sister was running around, being a typical toddler. It took a long time for me to be able to walk. I had to undergo a number of surgeries to basically straighten out my hips and my legs, so I could use leg braces and crutches to walk. All of the kids around me, they were able to run and jump. And recess time was the worst for me, because I wouldn't be able to do much of anything. When I was in business school, one of my friends was training for a marathon. One day, she was like, hey, Minda, I think you should check out this organization. It's called Achilles International. And it's a club for athletes with disabilities. It took me probably three or four months to get the courage to make the phone call. And, fortunately, the person who answered the phone was Dick Traum, who is actually the founder of Achilles. And he said: Hey, you know what? We have practices on Tuesdays and Saturdays. Why don't you just show up at 6:30 on Tuesday, and I will loan you my bike? I showed up on Tuesday. He loaned me his bike. And that was the first time that I was able to feel the wind in my hair. And I... man, I went really slow. I went like maybe 100 yards, but it was the coolest feeling to ride a hand cycle for the first time. To train for the Ironman World Championship, it was about a nine-month endeavor. And this way day in, day out, doing the workouts. My husband was super involved in my journey and the preparations. I made the swim time limit. I made the bike time limit. And, finally, when I was on that run, I was ecstatic. I knew I had a marathon to go, but I knew that I had it in the bag. And by the time I made that final right-hand turn on to Lee Drive, I realized how much it really meant to me to finally get it done. 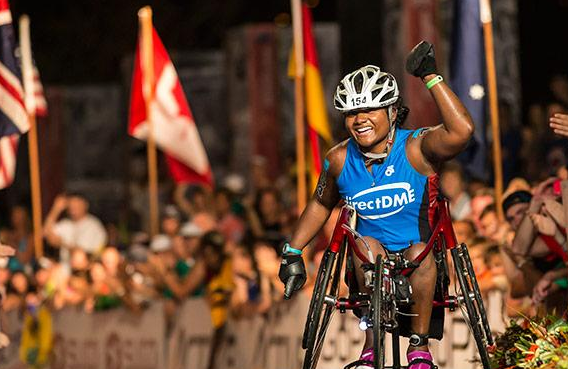 MAN: You are an inspiration, Minda. And you are an Ironman!

MINDA DENTLER: I was so excited, but I was in a lot of pain, too, because I had been exercising for a whole 14 hours and 39 minutes. But crossing that finish line was something else. By completing the Ironman World Champion, and just being successful in my life, having a full-time job, having a family, getting married, having a degree, I think gives me that confidence, knowing it doesn't matter who I am, what I look like. I'm able to be successful. My name is Minda Dentler. This is my Brief But Spectacular take on living with my disability.

JUDY WOODRUFF: And that's an inspiration. And you can find more episodes of our Brief But Spectacular series at PBS.org/NewsHour/Brief.